Desire or Hate – Fire or Ice? The Deep Thematic Ideas… 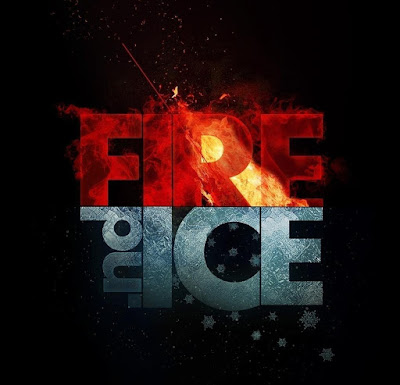 Desire or Hate – Fire or Ice?
The Deep Thematic Ideas…

Change brings both Fire & Ice to the forefront and is as dangerous as each other. In anger, many have stated that the hate toward someone or thing as they believe ‘you will burn in hell’.  Of course, again with hate or dislike, many have received the ‘cold shoulder’.

The meaning of words, phrases, and actions vary on which side of the fence one sits. It comes down to the communication of the subject matter.  The perfect example is the dumb advertisements for car insurance, which in most cases are purely for entertainment with a twist of remembrance.  You know Geico, Farmers, AFLAC and Progressive, all using humor for a very serious subject, insurance and the gamble for if something or someone goes wrong.

The way we are now able to communicate has dramatically changed.  The Smartphone, which as a label is a misnomer in itself, is the most powerful means of ‘touching’ with information, marketing messages and importantly, educational statements. 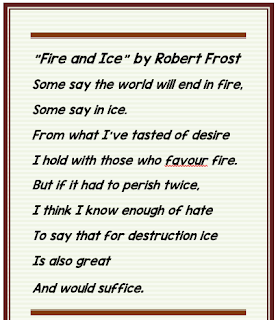 So, what are our desires for the ‘NOW’?  Is the world in that much trouble?

I turn to Robert Frost and his poem, ‘Fire & Ice’.

The poem itself does not require much explanation as to the meaning of his words or phrases, due to Frost’s attentiveness on making the poem decipherable and fathomable by all.

Notwithstanding the straightforwardness of the language use, the poem transmits with its very profound thematic ideas.

Fundamentally, Frost is providing observation upon two of the darkest traits of humanity: the capacity to hate, and the capacity to be consumed by lust. Of the two, he features the greater of two evils to desire, saying “From what I’ve tasted of desire / I hold with those who favor fire.”

In giving desire to the primary place in regards to the obliteration of the world, Frost is providing a commanding declaration on the subject of greed and jealousy, saying that above all else, even hatred, this is the trait of humanity that is most likely to lead to its passing.

To Frost, desire represents the utmost problem that the world faces. In light of the fact that this was written in regards to the Great War (1914-1918), this account is essentially ascribing the cause of the war to human greed and lust, in doing so providing an up-to-date and applicable warning against this conduct in the future. Following his statement upon fire and desire, Frost then features hatred with almost the same capacity to do harm as desire, saying “I think I know enough of hate / to say that for destruction ice…would suffice.”

While this diminishes the comparative standing of hatred in regards to the poem as a whole, it is still offered as having the ability to lead to the destruction of the world if it were to happen for the second time, which it did and today the concerns for a third, again providing an influential caution against this human misconception. Overall, then, the intention and meaning behind the poem is a basic desire on Frost’s part to warn, in his own style, against what he sees as the two extreme problems fronting civilization.

WE ARE IN THE NOW AND KEEP YOU;
IN THE KNOW…