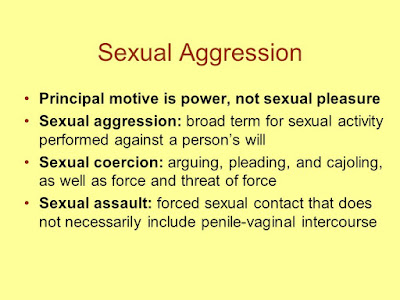 Do not believe that the male or for that matter, the female has suddenly become more sexually dominate in the last few years.

As we see in the daily headlines, newscasts, and the Internet, generational sexual abuse has suddenly been brought to the forefront.

Now, with a more direct means of communication, social media's reach and the instant audience are always front and center when allegations are cast.  Whether they are true or false, they make headlines and to hell with what the effects of the posting will have on the 'named individual,' their family, and public.

Accusatorial actions have consequences for all!  Just because it is stated by a named or un-named individual does not mean it is true, partially true, or a total lie.  The accused must have their day of reckoning as well.

Silence is not a signal of truth with the matter.  There are always two or three sides to any accusations, stories, or photographs.

Times have changed, and this Politically Correct World is a significant part of the problem!

Just what 'is' sexual misconduct?

Am I not allowed to make a comment on how great a co-worker or friend looks in a sweater?  Has 'goosing' had its day?

None of us, only the individuals concerned know what has transpired.  All the rest is conjecture, is it not?

Step back, look at how we joke about the caveman bashing a woman over the head and dragging her into his cave.  We don't have to finish the storyline as we know what he was after!

Comedy, over the years, is also the record of what was and generationally accepted as something to laugh at, mock, and take as natural in our daily lives.

Yes, there is a locker room banter, with men and women telling stories and jokes about sexual aggression.  We all laugh, even if we are disgusted and go along with the flow and to not be singled out as a prude.

It is stated by many learned individuals that much of what an individual today is shaped by the culture that he or she is born in and lives through, acquiring cultural values, attitudes, and behaviors. Culture determines definitions and descriptions of normality and psychopathology. Religion plays a vital role in how specific populations and societies view, perceive, and process sexual acts as well as sexual violence.

An essential element in the World Health Organization's (WHO) definition of sexual violence is the use of “coercion” or force, and there is a high possibility that there are cultural differences concerning what is labeled as “forced” sexual intercourse. Various cultures describe certain forms of sexual violence that are condemned and other structures that may be tolerated to a degree, the culturally legitimized forms of violence, thus giving rise to a continuum with transgressive coercion at one end to tolerated coercion at the other.

For example, in South Africa, only the rape of white women was prosecuted under an apartheid system, while sexual violence against black women was accepted as a part of life. Childhood marriages in certain parts of rural India involve marriage and sexual relationship with a girl who is not yet an adult. It, thus, amounts to sexual coercion and is considered illegal. However, the entire issue is sanctioned by personal laws defined by individuals who partake in such marriages as condoned by Khap Panchayats, who decide on marriage partners in certain parts of North India. Similarly, sexual violence is considered legitimate by young men in South Africa who also believe that mental health is negatively affected by a lack of sex.

Cultural aspects of sexual violence can be understood from observations and literature on interpersonal violence (IPV) in the context of sexual acts. Higher rates of sexual abuse are expected to be more prevalent in cultures that encourage the objectification of women, thus making them appear inferior to men.

However, not all cases are reported to the respective authorities. As high as 67%-84% of cases of sexual violence may go unreported due to the sensitivity of the issue, thereby making it difficult to gather exact figures and a real sense of the problem. It has been postulated that the rates of unreported sexual offenses are higher in some Asian cultures where virginity is highly valued, and a woman's modesty is of utmost importance that gives her family the much-required respect.

Within the evolutionary psychology framework, a higher male-female sex ratio (more men than women) gives rise to competition among males for female mates. This may lead to sexual jealousy and frustration among men contributing to sexual violence. This theoretical framework looks at sexual abuse as a method used by men to ensure the sexual fidelity of their female mates.

However, this may also mean that this theory is applicable only to intrarelationship sexual violence as it refers to fidelity, which occurs within the context of a relationship. This hypothesis may, thus, not explain the rise in cases of child sexual abuse where there is no question of fidelity. It is, of course, entirely possible that this rise is likely with better and accurate reporting.

A paradoxical hypothesis by Guttentag and Secord argues that a high sex ratio with fewer women compared to men raises the value that men give to women, thus reducing the chances of him resorting to intimate partner violence, including sexual abuse.

Within any sociocultural setting, the meaning of being a man/woman and manhood/womanhood may vary with masculine identity being associated with experiences and feelings of power. Paternalistic cultural models encourage the view that men protect women from harm, thus giving the impression that women are mostly incapable of defending themselves.

In addition to violence, the incident of sexual abuse involves elements of control, power, domination, and humiliation. To gain power and control over their victims, perpetrators of sexual violence resort to practices such as abduction, isolation, manipulation, coercion, threats, and sexual abuse. Offenders may not necessarily find the act sexually gratifying, but it is the meaning attributed to power for men that may override sexual goals in such actions. This is very well exemplified in sexual violence against children, which is fundamentally an expression of control over a child's life. Resisting the offender's attempts is unlikely, especially so in the case of children, since they do not always have the cognitive maturity to understand the wrongness of the act.

It has also been postulated that gender equality may increase sexual violence in the form of male backlash, with men being more commonly known to commit sexual abuse across different cultures. It is also entirely possible that increased media attention may attract some individuals to perform these acts so that they gain a degree of infamy.

The latter is hard to believe but nevertheless stated by some!

It seems that this sexual aggression is all onesided, it is not, men shame men, and waiting in the wings are many issues of women being aggressive, sexually to men.  Time will tell and so will others, just wait and see!