Co-operation of the Public is for the Safety of All 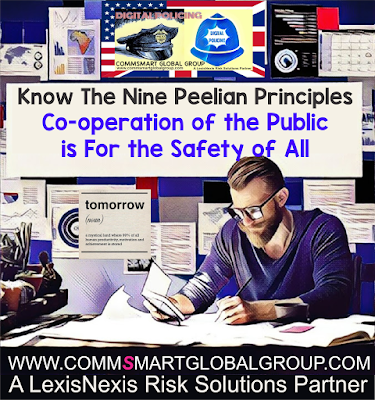 Co-operation of the Public
is for the Safety of All 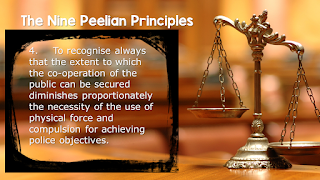 #4         To recognise always that the extent to which the co-operation of the public can be secured diminishes proportionately the necessity of the use of physical force and compulsion for achieving police objectives.

Consequences in life are never-ending and this #4 Peelian Principle is that everyday use of force and coercion by police is an indication of the degree of public support or lack thereof.
The majority of police agencies in the U.K. and North America have adopted policies that employ a use of force continuum.  The continuum lists the various use of force options available to police and the accompanying policy outlines the process police should employ to determine the appropriate level of force to use.

The range spans possibilities that range from the initial verbal instructions or commands to the use of deadly force at the other extreme of the gamut.

Between those two options fall a variety of other alternatives depending on the training and policy of a particular police agency.  The continuum can include soft empty handed control, joint manipulation, pain causing techniques, non-lethal weapons such as batons, pepper spray, and conducted energy devices, and then, a deadly force which involves the use of firearms.

What this fourth principle lays out is that a lack of public cooperation will demand not only more frequent but also an advanced level of force and pressure by police.

The more frequent use of Tasers and other ‘intermediate’ weapons has been adopted by agencies, with many police officers now on the streets having never policed without such options.  It may be a mindset reinforced by training.

Current training may prompt officers to resort to Tasers more quickly than police officers would have resorted to physical force or the use of a baton in the past.

The question asked so many times over the years and more so now, is why are more people shot dead by police officers?  No, they are not ‘gun-happy’!

Those that break the law and go to the extreme of violence whilst being arrested or challenged are endangering the officer and many law scoffers of this ilk, carry guns and knives.

Officers are highly trained for these situations.

The fact is training is not a reality!  In the real world in milliseconds, decisions have to be taken and made. How many times have we heard, “we did they not shoot him in the arm or leg and kill him”?

Those type of shots are luck shots and not typical in the heat of the moment.

Even the Taser does not stop all!

The public has to understand that a police officer when commands you do something, obey under the letter of all agreed laws.

CommSmart Global Group, a LexisNexis Risk Solution Partner believe firmly that Sir Robert Peel’s Nine Peelian Principles stand firm today after 189 years of existence.  Of course, there are differences and the main one is the use of technology alongside these principles.  That is why we will introduce the 10th Peelian Principle at the conclusion of this series.

Social media interactions are so important and CommSmart Global Group, a LexisNexis Risk Solutions Partner understand the finger & thumbs approach of communicating using for calls for action of the public.

There lies a massive improvement in the approval of the public, they have a direct link without dialing digits.  They hide behind a Smartphone or tablet/computer screen and the dialogue is honest, deceiving and all with information that was never there before.

Here lie CommSmart Global Groups abilities to know all that is being said and stated via social media with compliant social media monitoring, with crime/predictive analytics and community crime mapping.  This can be enabled within your agencies now!

This, not something that has just been invented and so new it is still in a ‘beta phase’, we have 21 years of creating, refining and success, second to none.

What is our difference and why we can bring back the Trust, Respect, and Honor to policing is virtually simple, we converse, coach, mentor and enable through our software, global databases all with full professional services that work alongside you to fully understand the methods and you attain results immediately and grow a whole new way of public interaction and accomplishment.

Working hand in hand with warranted and sworn officers in all departments, enabling information at the fingertips on the street, improving officer safety.
Let us not forget the important analyst who can share your information and glean even more information to solve those crimes.

Make CommSmart Global Group you Crime Link Analysis across the board with our Virtual Crime Center Solution. 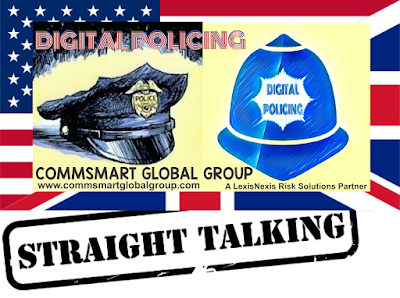 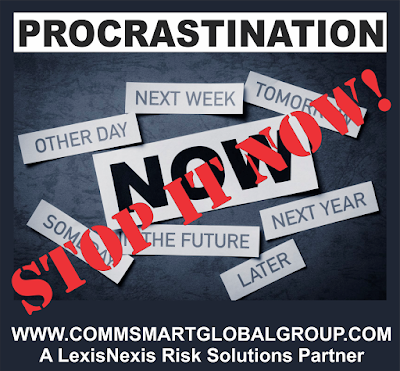 
Posted by Police Best Practice at 2:30 AM